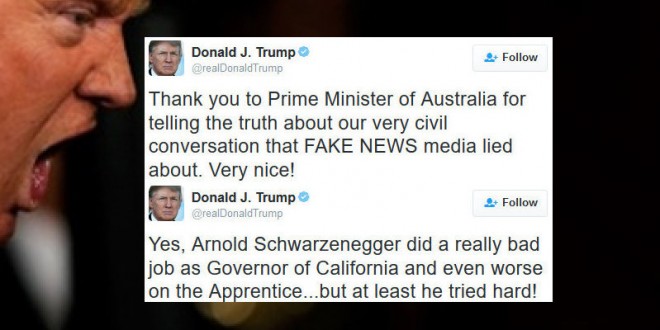 President Donald Trump on Friday thanked Australian Prime Minister Malcolm Turnbull for “telling the truth” after news swirled that the two men had clashed during a phone call last weekend that abruptly ended when Trump reportedly hung up the phone.

Trump’s conversation with Turnbull last Saturday became a headline this week when The Washington Post reported details from that call. In it, Trump called a refugee agreement reached between Australia and the administration of former President Barack Obama “the worst deal ever” and that one of the individuals the U.S. agreed to take under the deal could be the “next Boston bombers.”

The president also reportedly told Turnbull that their conversation was “the worst call by far” of all that he had had with foreign leaders. But Turnbull disputed some of that reporting, telling a radio interviewer in Australia that Trump did not hang up on him and that their phone call ended “courteously.” Beyond that, Turnbull has declined to share specifics of their conversation.

President Trump escalated his war of words with Arnold Schwarzenegger Friday morning, trashing his gubernatorial and reality TV hosting record. ‘Yes, Arnold Schwarzenegger did a really bad job as Governor of California and even worse on the Apprentice…but at least he tried hard!’ the president tweeted just before 6:30am Eastern Time.

Schwarzenegger replaced the Donald as host of the Celebrity Apprentice this season, after NBC severed their dies with the mogul in the wake of inflammatory statements he made on the campaign trail. The new season of the show premiered this Monday, to dismal ratings – despite hopes that the controversy would cause more viewers to tune in.