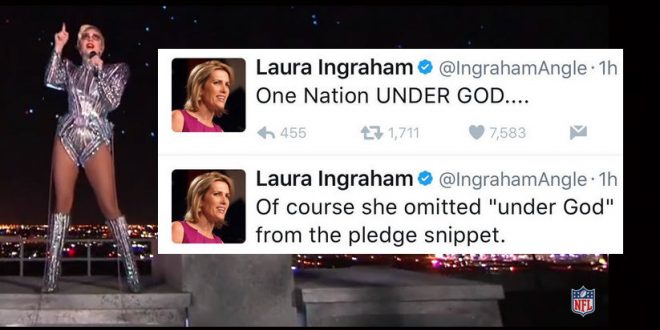 Wingnut Laura Ingraham Rages That Lady Gaga Didn’t Say “Under God” At Super Bowl, Which She Actually Did

Last night right wing screecher Laura Ingraham inflamed her Twitter followers by claiming that Lady Gaga omitted “under God” when she recited a bit of the Pledge Of Allegiance at the opening of her Super Bowl performance.

But as about one billion humans heard, Gaga DID say those two words, which were added to the pledge during the height of the Cold War at the urging of the Catholic advocacy group, the Knights Of Columbus. Ingraham later deleted her tweet without apology after a firestorm of mocking.

Mind you, Ingraham was corrected by none other than Dana Loesch moments after claiming Lady Gaga omitted God from the pledge, yet left it up

If Gaga’s brilliant precognitive trolling of right wing whiplash media takes Laura ingraham down i will buy every one of her albums.