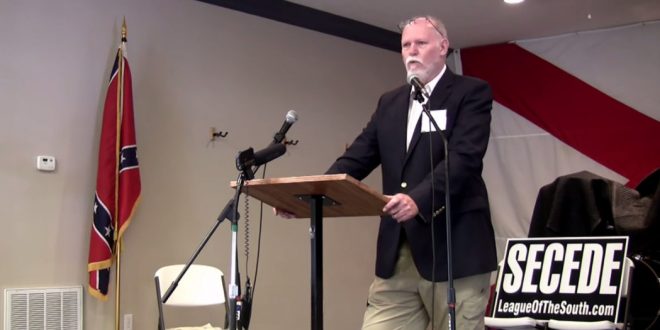 In a military-styled order titled “Directive 02022017,” Michael Hill, president of the neo-Confederate League of the South (LOS), announced Friday the formation of a new vigilante “defense force.”

The League of the South is calling for all able-bodied, traditionalist Southern men to join our organization’s Southern Defense Force for the purpose of helping our State and local magistrates across Dixie combat this growing leftist menace to our historic Christian civilization. As private citizens in a private organization, we will stand ready to protect our own families and friends, our property, and our liberty from leftist chaos. Moreover, we will be ready to assist our local and State authorities in keeping the peace should they find it necessary to “deputize” private citizens for that purpose.

It remains to be seen what actions the new “Southern Defense Force” [SDF] will take to “plan for contingencies – natural or man-made –– that might affect the Southern people.” But announcements of plans to militarize the League are not new.  In 2014, the group began developing and training a paramilitary unit called the “Indomitables” to advance a second secession, though such efforts fizzled quickly.

Two days after the election, Hill declared that Trump’s victory means that white supremacists can now “drive a stake through the heart” of Jews and minorities.