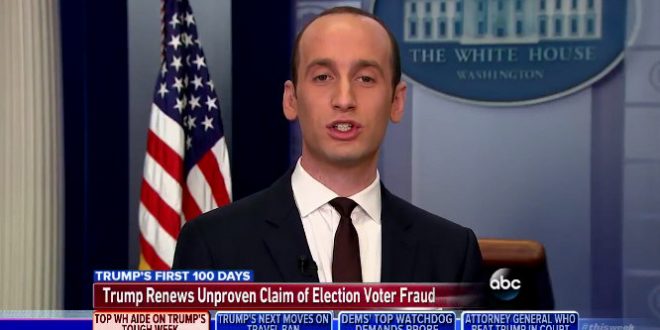 George Stephanopoulos got particularly heated with White House senior policy advisor Stephen Miller over recent claims by President Trump of voter fraud. The president claimed last week that he would have won New Hampshire if “thousands” of people hadn’t been bussed in to illegally vote.

Miller argued to Stephanopoulos that “anyone who’s worked in New Hampshire politics” is aware of this, but Stephanopoulos asked him to provide evidence. He ended up getting testy with Miller as he kept arguing his point, telling him, “Just for the record, you have provided absolutely no evidence.”

Stephanopoulos shuts down Miller’s voter fraud defense: “For the record, you have provided zero evidence.” pic.twitter.com/IlAV0KM8kk

Previous TENNESSEE: GOP Rep Intros Bill To Classify Children Born From Artificial Insemination As “Illegitimate”
Next How To Become Trump’s US Ambassador To Austria: Watch The Sound Of Music At Least 75 Times [VIDEO]