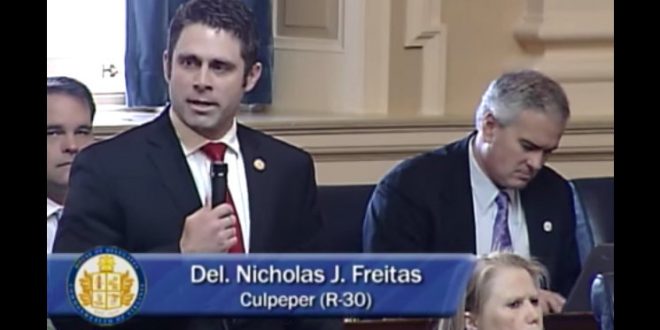 Today, the Human Rights Campaign (HRC) and Equality Virginia blasted the Virginia House of Representative’s final vote of 54 to 38 passing House Bill (HB) 2025 — discriminatory legislation seeking to give taxpayer-funded agencies and service providers a license to discriminate against LGBTQ people under the guise of religion. The dangerous anti-LGBTQ proposal now heads to Governor Terry McAuliffe, who has promised to veto the bill.

“Let’s be clear, HB 2025 is nothing more than a thinly veiled legislative assault on LGBTQ Virginians and visitors to the state,” said HRC Senior Vice President for Policy and Political Affairs JoDee Winterhof. “The measure has nothing to do with the right to practice one’s religion — which is already firmly protected in the U.S. Constitution — and everything to do with enshrining taxpayer-funded discrimination against LGBTQ people into law. Just as we saw in North Carolina, HB 2025 would no doubt inflict profound harm on Virginia’s people, reputation, and economy. Governor McAuliffe must follow through on his promise to veto this repulsive proposal.”

“Today is a sad day for the people of Virginia,” said Equality Virginia Executive Director James Parrish. “Instead of working to find solutions to the real problems we face as a state, our lawmakers are pushing shameful legislation providing a license to discriminate against loving LGBTQ families. We don’t want to be the next North Carolina. We applaud Governor McAuliffe’s promise to veto HB 2025 which will send a clear message that this legislation does not represent the values we hold dear as Virginians.”

Earlier this month GayRVA reported on the bill:

Submitted by Delegate Nicholas J. Freitas [photo], HB2025 offers a shield to any “person” from punishment from the state, civil or otherwise, if they deny services in a same-sex marriage.

“I fundamentally don’t believe that the government should be coercing people to do things that they don’t want to do,” said Del. Freitas in defense of the bill. “I take a fairly broad view of that. We don’t want to be engaging in bigoted discrimination, but when the government is engaged in a form of discrimination against a religious institution, it may require us to pass certain bills.”