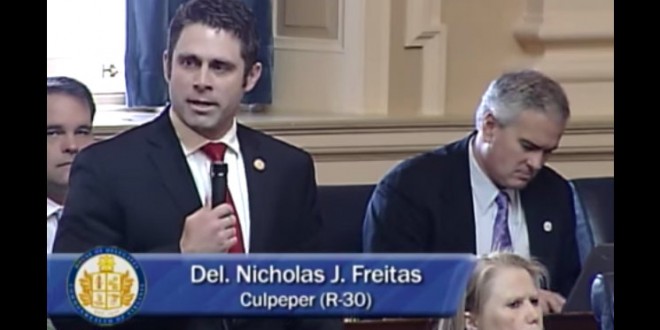 Today, the Human Rights Campaign (HRC) and Equality Virginia strongly condemned the Virginia House of Delegates for passing HB 2025 — discriminatory legislation that seeks to give taxpayer-funded agencies and service providers a license to discriminate against LGBTQ people under the guise of religion. The dangerous anti-LGBTQ proposal will now move to the Senate for consideration.

“The Virginia House of Delegates’ decision to pass this legislation puts the state’s people, reputation, and economy at risk,” said HRC Legal Director Sarah Warbelow. “This reckless bill in truth has nothing to do with the right to practice one’s religion, which is already firmly protected by the First Amendment. Rather, it is a thinly veiled attempt to provide a special license to discriminate with taxpayer funds. The discriminatory measure would no doubt result in multiple, expensive legal challenges and fallout similar to the self-inflicted wound in North Carolina from HB2. The Virginia Senate must reject this legislative assault on LGBTQ Virginians and their families.”

“We recognize that religion is a vital part of many Virginians’ daily lives, but HB 2025 does not protect religious liberty. Instead, it provides a license to discriminate against loving LGBTQ families,” said Equality Virginia Executive Director James Parrish.  Furthermore, its broad and vague definition of ‘person’ would set a dangerous precedent for discriminatory individuals and groups to be protected by our religious freedom laws.”

HB 2025 could allow taxpayer-funded organizations like homeless shelters and adoption agencies to refuse service to same-sex couples, transgender people, and anyone suspected of having intimate relationships outside of a heterosexual marriage (such as single mothers or a cohabiting straight couple) without losing taxpayer funding, contracts, licensing, or other forms of state recognition.

The bill was authored by Del. Nicholas Freitas and was approved by a 57-37 vote. See it here. Last year Democratic Gov. Terry McAuliffe vetoed a similar attempt.

Previous Fox News Analyst On Trump’s War Threat To Iran: It’s Like A Crusade, We’re Doing It Under God [VIDEO]
Next Nutjob Larry Klayman Sues Obama For Assault Because Some Woman Yelled At Him At The Airport [VIDEO]