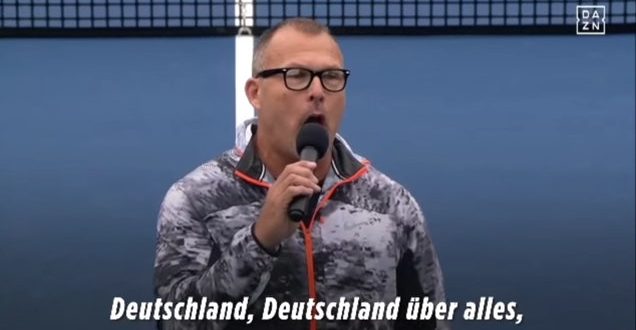 Over the weekend, the U.S. hosted Germany in the national team-based women’s tennis tournament, the Fed Cup. Before American Alison Riske took on Germany’s Andrea Petkovic in a singles match in Hawaii, both national anthems were played. And that’s where things went wrong.

A live soloist belted out not just the wrong version of the German anthem, but the Nazi-era version, which includes the line “Deutschland, Deutschland uber alles” (“Germany, Germany above all else”) that was used in propaganda by the Third Reich.

“I thought it was the epitome of ignorance, and I’ve never felt more disrespected in my whole life, let alone in Fed Cup,” Germany’s Andrea Petkovic said after the match. “We were left shocked and did not know how to react.” In the background, you can hear what appears to be the German players and fans trying to drown out the anthem singer by singing the correct lyrics.

There are several viral versions of the performance. The one below has nearly 500,000 views at this writing.

The USTA extends a sincere apology to the German Fed Cup team & fans 4 the outdated National Anthem. This mistake will not occur again. pic.twitter.com/4LyG3ACe5u

Previous REPORT: Chaos Inside The National Security Council
Next REPORT: Republicans Don’t Care About Trump’s Insane Lies As Long As He’s Pushing Through Their Agenda