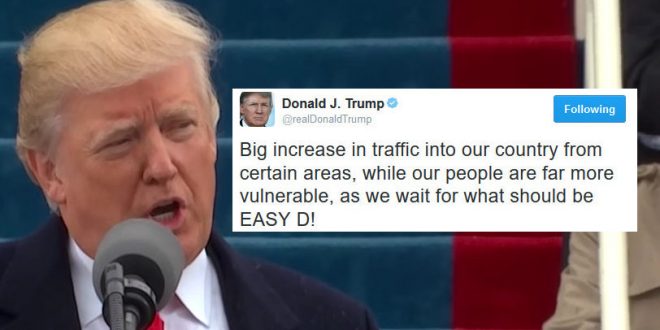 President Trump on Wednesday said there has been a large increase of people come into the U.S. from “certain areas” as federal judges are weighing whether a court order blocking the president’s travel ban should be lifted. “Big increase in traffic into our country from certain areas, while our people are far more vulnerable, as we wait for what should be EASY D!” the president tweeted Wednesday.

Hey, Dum-Dum. Ask a grownup to show you what "EASY D" means at the urban dictionary websites. #ClownPresident https://t.co/K3azqf5jcc

I've instructed my staff that I expect to be called "Easy D" for the remainder of this week. #chillin https://t.co/wpKtH9RuEp

Coincidentally, "Easy D" is the nickname now given to all children in Betsy DeVos' public school system.

"Don't wait for what should be EASY D, download @Grindr NOW!" pic.twitter.com/CwIlHZijWi

Easy D was the worst member of NWA. #StraightOuttaTrumpton https://t.co/XOSNhP2Eq0

The president wants easy D and he doesn't want to have to wait for the D https://t.co/5iQamldG2J