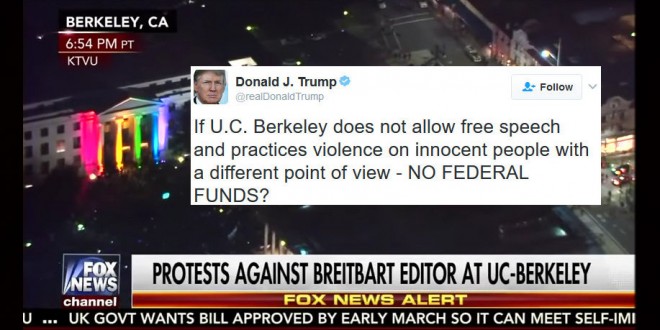 A speech by the divisive right-wing editor Milo Yiannopoulos at the University of California, Berkeley, was canceled on Wednesday night after demonstrators set fires and threw objects at buildings to protest his appearance.

The university announced the cancellation on Twitter around 6 p.m. local time, about an hour after a section of the campus erupted in protest. All buildings on campus were locked down for several hours, and the university police said on Twitter that students should leave the area because of the “violent demonstration.” The lockdown was lifted around 10:55 p.m. local time.

Early Thursday morning, President Trump spoke out against the university for canceling the event. Mr. Yiannopoulos, an editor at Breitbart News, is known for his gleeful attacks on political correctness that can sometimes veer into offensive and racially charged language.

On Facebook, Mr. Yiannopoulos said he had been evacuated from the campus after “violent left-wing protesters tore down barricades, lit fires, threw rocks and Roman candles at the windows and breached the ground floor of the building.” He added, “One thing we do know for sure: The Left is absolutely terrified of free speech and will do literally anything to shut it down.”