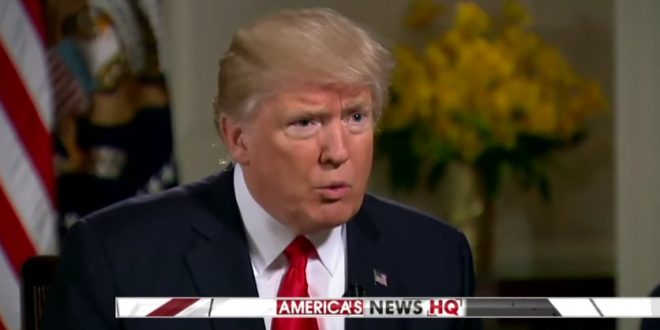 Trump Tells Bill O’Reilly: Yes, Vladimir Putin Is A Killer, But Do You Think Our Country Is So Innocent? [VIDEO]

Fox News’ Bill O’Reilly sat down for the network’s second interview with President Trump that will air on Sunday afternoon ahead of the Super Bowl. Fox News promoted a pretty astounding excerpt of the interview where O’Reilly asks Trump about Vladimir Putin. Trump says that he respects the Russian president and when pressed about the dark, violent side of Vladimir Putin’s reign at the Kremlin, Trump responds: “What you think our country’s so innocent?”

On Sunday, Senate majority leader Mitch McConnell was asked what his response would have been if President Obama had compared the US to Russia under Putin. He said Putin was a “former KGB agent and a thug” and said: “I don’t think there’s any equivalency between the way Russians conduct themselves and the way the United States does.

“I’m not going to critique the president’s every utterance, but I do think that America is exceptional, America is different, we don’t operate in any way the way the Russians do. There’s a clear distinction here that all Americans understand and I would not have characterised it that way.”

Are you confident the president understands it, host Jake Tapper asked. “I’m not going to critique every utterance of the president,” McConnell repeated, before adding: “I obviously don’t see this issue the same way he does.”

CNN National Security correspondent Jim Sciutto reacted to President Trump‘s latest interview tonight by saying that the remarks lowered America to the sociopolitical standard of authoritarian countries. Sciutto was also concerned that authoritarian nations might take Trump’s “moral relativism” and use it as a propaganda tool to justify their own behaviors.

“The U.S. has made many mistakes, but the question is, putting it on a par with a historic authoritarian state such as Russia is, one, just not factually true, and two, just a remarkable thing for American president to say,” Sciutto said. Sciutto went on to contrast America and Russia’s historical actions, and he reiterated that it was “just remarkable” to hear Trump comparing the two.

Trump puts US on moral par with Putin's Russia. Never in history has a President slandered his country like this. https://t.co/LrP8ycG1Y9