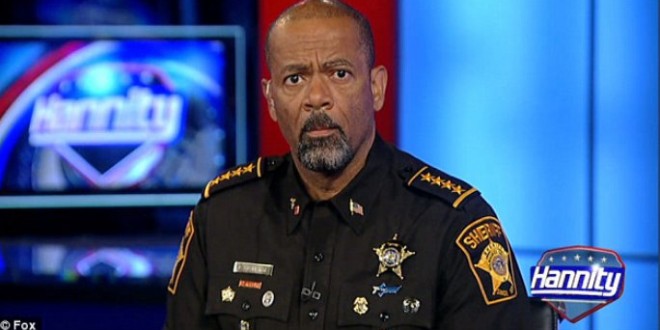 A Riverwest man filed a federal lawsuit on Thursday against Milwaukee County Sheriff David A. Clarke Jr., several unnamed deputies and Milwaukee County after he says he was detained, interviewed and escorted out of Mitchell International Airport by a half-dozen deputies after a brief run-in with the sheriff on a plane.

Dan Black, 24, alleges in the suit that he was the victim of an unlawful stop and arrest at the airport on Jan. 15. The suit asks for unspecified damages for violations of Black’s constitutional rights to equal protection and freedom from unreasonable searches and for “emotional distress and other compensatory damages.”

“This was a gross and arbitrary abuse of power,” said Black’s attorney, William Sulton. Clarke did not immediately respond to the suit. He often posts his thoughts on various issues on the Facebook page for the Milwaukee County Sheriff’s Office.

In the lawsuit, Black says he saw Clarke — decked out in Dallas Cowboys attire — on the American Airlines flight from Dallas to Milwaukee on Jan. 15. But, according to the suits, Black wasn’t sure it was the sheriff because he wasn’t wearing his signature Stetson, so the Black asked Clarke if he was the sheriff.

Clarke indicated that he was the sheriff, the suit says, and then Clarke asked Black if he had a problem. Black says in the suit that he responded by saying he did not. When he got off the plane, Black says he was met by a group of six uniformed deputies along with the sheriff. Black asserts that he was then arrested and escorted to a waiting area for a 15-minute interview that included questions about his political beliefs. Afterward, he was escorted from the airport by the two deputies.

Since the incident Clarke has posted at least two threats of violence against Black on the official Facebook page of the Milwaukee County Sheriff’s Office.

RELATED: Clarke was a headlining speaker at the 2016 Republican National Convention. Shortly before election day, he called for “pitchforks and torches” if Trump were to lose. Clarke is currently under investigation after an inmate in his jail died of thirst because the water to his cell had been cut off for six days.