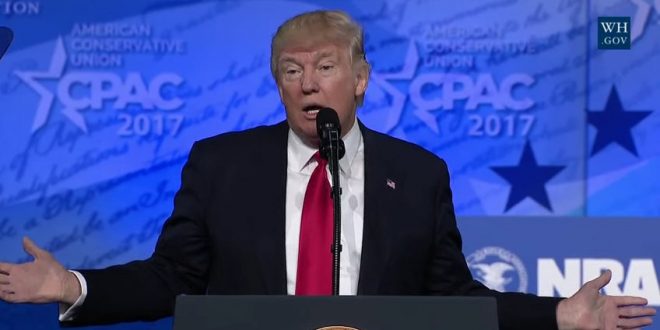 President Trump appeared to suggest Tuesday that the wave of bomb threats against Jewish community centers across the U.S. could be coming from within the Jewish community itself, according to a Pennsylvania state lawmaker present for the comments.

Pennsylvania Attorney General Josh Shapiro, who was part of a group of state attorneys general meeting with Trump at the White House Tuesday, relayed Trump’s comments about the bomb threats to Buzzfeed News, explaining that the commander-in-chief seemed to indicate he felt some of the threats were being made from the inside, as part of a potential effort “to make others look bad.”

“He just said, ‘sometimes it’s the reverse, to make people, or to make others, look bad,'” Shapiro said, repeating Trump’s alleged response to questions during the meeting about the large number of bomb threats against Jewish community centers in recent months. “It didn’t make a whole lot of sense to me,” Shapiro said of Trump’s remarks.

Unsurprisingly, the Anti-Defamation League is flipping out:

“We are astonished by what the President reportedly said. It is incumbent upon the White House to immediately clarify these remarks. In light of the ongoing attacks on the Jewish community, it is also incumbent upon the President to lay out in his speech tonight his plans for what the federal government will do to address this rash of anti-Semitic incidents,” Jonathan Greenblatt, CEO of ADL, said in a statement.

In case you’re wondering when Trump is getting this.

It’s not yet clear who the #JCC offenders are. Don’t forget @TheDemocrats effort to incite violence at Trump rallies https://t.co/uTBFGhI0Kh