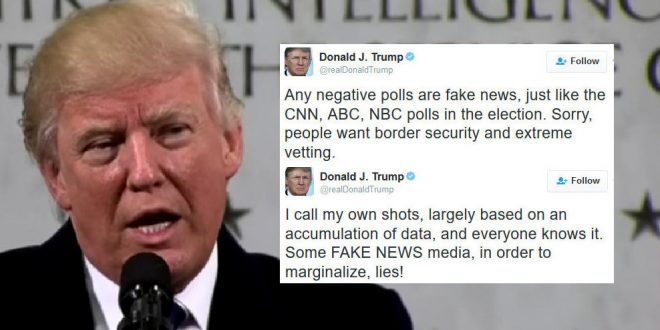 Mr. Trump appears not to like the news he’s reading Monday morning. In one Twitter post, the president rejected reports of polls showing that a majority of Americans oppose his travel order.

In another, he appeared to lash out at suggestions that Stephen K. Bannon, his chief strategist, holds the real power in the West Wing. A CNN poll released over the weekend said that 55 percent of Americans viewed Mr. Trump’s travel order as an attempt to keep Muslims out of the country.

The president also seemed angry about the Mr. Bannon-in-charge story line, which was featured in a Time magazine article and in a Saturday Night Live skit showing Mr. Bannon as the Grim Reaper who directs Mr. Trump’s activities in the White House. On Twitter, Mr. Trump called that “fake news” that seeks to marginalize him.

I call my own shots, largely based on an accumulation of data, and everyone knows it. Some FAKE NEWS media, in order to marginalize, lies!