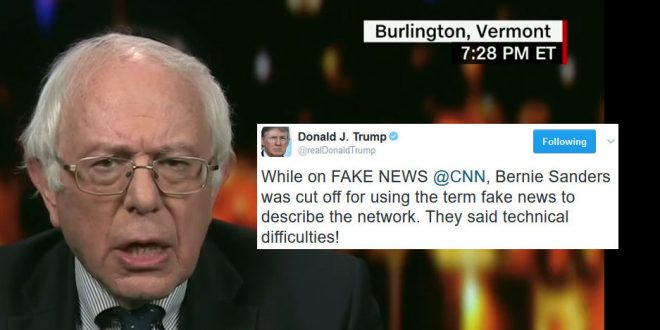 CNN early Sunday rejected President Trump’s accusation that Sen. Bernie Sanders (I-Vt.) was cut off during an interview for using the term fake news to describe the network. “@realDonaldTrump False. Transcript from @ErinBurnett intvu w @SenSanders. He was not cut off. Those are the facts,” CNN’s public relations team tweeted.

Sanders was asked during an interview Friday night to respond to a clip of the president saying he hadn’t seen reports that his national security adviser, Michael Flynn, had discussed sanctions with Russia before Trump’s inauguration. “I don’t know about that. I haven’t seen it. What report is that?” Trump asked.

Sanders was asked if it was a “problem” that the president said he hadn’t seen any of those reports. “Well, I don’t know. Maybe he was watching CNN fake news. What do you think?” he asked. “It was a joke,” Sanders added, before the feed cut out.

While on FAKE NEWS @CNN, Bernie Sanders was cut off for using the term fake news to describe the network. They said technical difficulties!

Untrue. Sanders was *criticizing Trump* for calling CNN “fake news.” You can see for yourself, all 11 minutes, here: https://t.co/qhtlb5Wo6Q https://t.co/AcwOiNHi0j

Stop me if you've heard this one before. But @FoxAndFriends covered the Bernie "technical difficulties" thing at 6:40. Trump tweeted at 7:14 https://t.co/AcwOiNHi0j

Previous Melissa McCarthy Slays Again As Sean Spicer [VIDEO]
Next Out Magazine Writer: The Vicious Backlash To My Milo Interview Made Me Realize I’m A Homocon Too