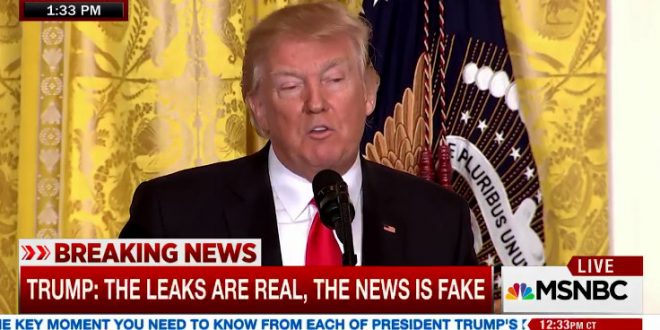 Trump: The Leaks Are Real, The News Is Fake [VIDEO]

President Trump declared during his Thursday press conference: “The leaks are real. The news is fake.” Trump was insisting that the leaks that informed the media’s reports on Trump’s campaign aides’ alleged contact with senior Russian intelligence officials were “real,” but the resulting reports on those very “real” leaks were “fake.”

A reporter later asked Trump to clarify how the two incongruous statements could both be true. “The reporting is fake,” Trump said. He went on to explain that because he’s “involved,” he’s able to discern whether something is real or fake. “I know when you’re telling the truth and when you’re not,” Trump said.

President Trump: “The leaks are absolutely real. The news is fake.”

Previous FRC Reacts To “Outrageous” Florist Ruling By Renewing Call For Trump To Legalize Anti-LGBT Discrimination
Next Pat Robertson: God Is Working On Trump’s Behalf So Opposing Trump Is Opposing White Jesus Himself