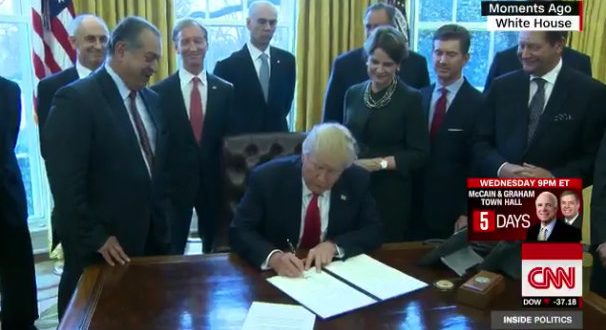 “Excessive regulation is killing jobs,” Trump said at an Oval Office signing ceremony Friday. “Every regulation should have to pass a simple test: Does it make life better or safer for American workers or consumers? If the answer is no, we will be getting rid of it.”

The order, titled “Enforcing the Regulatory Reform Agenda,” directs heads of departments and agencies to designate a “regulatory reform officer” to oversee implementation of regulations and identify needed changes, according to Bloomberg BNA. The text of the order was not immediately released.

Previous KANSAS: Murder Charges For Man Who Shoots Three After Shouting “Get Out Of My Country” [VIDEO]
Next Univision Plans Pulse Massacre Reenactment