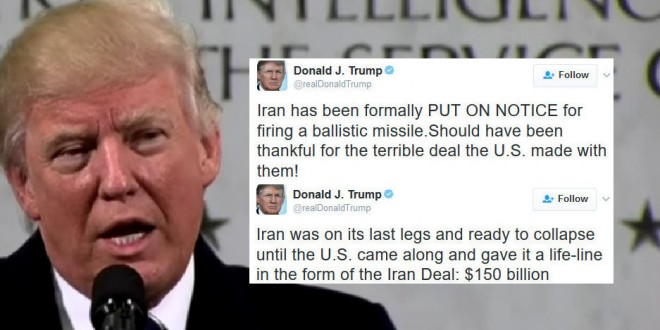 Iran was on the verge of collapse until the U.S. gave it a “lifeline” in the form of the nuclear deal between Iran and six world powers, President Trump said Thursday. “Iran has been formally PUT ON NOTICE for firing a ballistic missile,” Trump tweeted. “Should have been thankful for the terrible deal the U.S. made with them!”

Trump was repeating comments made a day earlier by national security advisor Michael Flynn. Trump also tweeted, “Iran was on its last legs and ready to collapse until the U.S. came along and gave it a life-line in the form of the Iran Deal: $150 billion.”

Flynn said Wednesday that the “Obama administration failed to respond adequately to Tehran’s malign actions” and put Iran “on notice,” without elaborating on what actions may be taken.

At a White House briefing, senior administration officials repeatedly refused to rule out any options for a US response, including military intervention. “There are a large number of options available to the administration,” one senior official said. “We’re going to take appropriate action.”

Asked if measures under consideration included a military option, the official replied: “We are considering a whole range of options.” The official declined to say whether the White House had sent a message to Tehran putting it on notice.