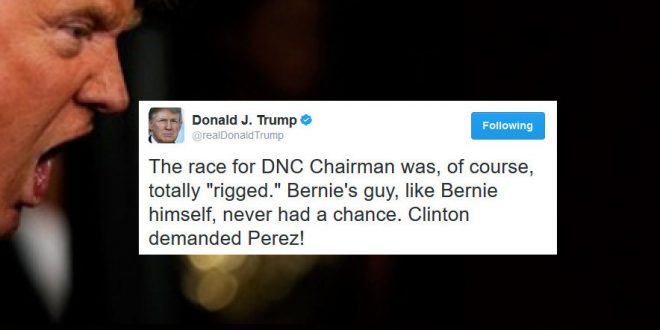 Former Labor Secretary Tom Perez on Saturday defeated Rep. Keith Ellison (D-Minn.) to become the next DNC chairman in a win for centrist Democrats. The race, which split along establishment-grassroots lines, in many ways mirrored the divisive 2016 presidential primary between Sen. Bernie Sanders (I-Vt.) and Hillary Clinton.

Sanders and many of his allies backed Ellison, the first-ever Muslim elected to Congress and a star on the left. Trump throughout the campaign said the Democratic primary system was rigged against Sanders and appealed for the senator’s supporters to back the real estate mogul’s campaign.

Perez dismissed Trump’s tweet to CNN’s Jake Tapper on Sunday morning. “Congressman Ellison and I got a good kick out of that,” Perez said. “Donald Trump, up in the morning tweeting about us. You know, our unity as a party is our greatest strength and it’s his worst nightmare.”

Perez was the favorite of many allies of former President Barack Obama, including former Vice President Joe Biden, but Hillary Clinton did not make an endorsement in the race. Sen. Bernie Sanders also dismissed the tweet, speaking to Tapper a few minutes later.

“No, he doesn’t have a point,” Sanders said, referring to Trump’s claim that the process was rigged against Ellison, whom Sanders had endorsed. The Minnesota Democrat had been a strong supporter of Sanders during the primary season.