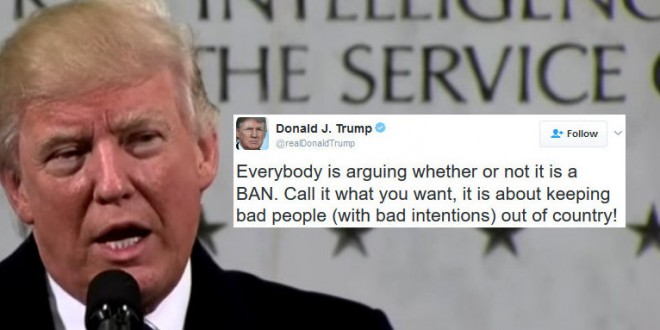 Trump Contradicts Spicer: Call It A “Ban” If You Want

President Trump said Wednesday people could call his executive order barring refugees and people from seven predominately Muslim countries from entering the U.S. whatever they’d like amid questions over whether the measure is a “ban.”

White House Press Secretary Sean Spicer on Tuesday said the president’s executive order is not a “travel ban.” Spicer blamed the media for casting the controversial policy as a “travel ban.” “It’s not a Muslim ban. It’s not a travel ban,” Spicer told reporters. “It’s a vetting system to keep America safe.”

Everybody is arguing whether or not it is a BAN. Call it what you want, it is about keeping bad people (with bad intentions) out of country!