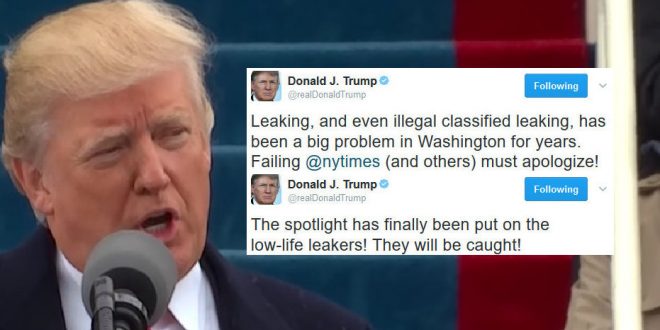 President Trump on Thursday called for The New York Times and other publications to apologize after reporting leaked information, saying the spotlight is on “low-life leakers.” In a subsequent tweet, the president said those who leaked information will be caught.

The president, who praised WikiLeaks during the campaign, has been going after the intelligence community recently and accusing officials of leaking information since the resignation of his national security adviser, Michael Flynn.

On Tuesday, The New York Times cited four unidentified U.S. officials in a report that said Trump campaign staffers had “repeated contacts” with Russian officials during the election. Trump on Wednesday accused the intelligence community of giving out leaks “like candy.”

Leaking, and even illegal classified leaking, has been a big problem in Washington for years. Failing @nytimes (and others) must apologize!

The spotlight has finally been put on the low-life leakers! They will be caught!