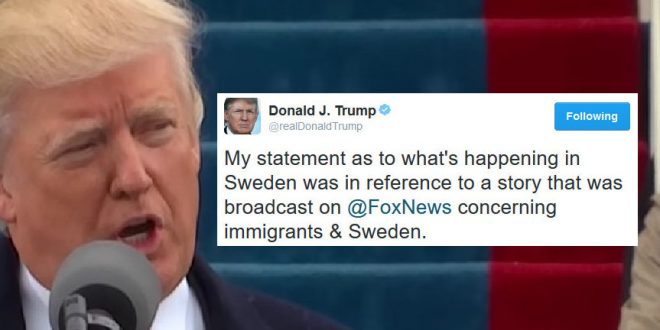 Trump Confirms: I Get My Intel From Fox News

President Trump sought to explain his reference to a nonexistent terrorism incident in Sweden at a rally Saturday night, pointing to a story from Fox News. “My statement as to what’s happening in Sweden was in reference to a story that was broadcast on @FoxNews concerning immigrants & Sweden,” Trump tweeted Sunday.

Trump confirmed speculation that a Fox News story about immigration and crime rates that aired on Tucker Carlson’s show was the origin of his statement. The Swedish Embassy in Washington, D.C., asked the U.S. to clarify what incident Trump was referring to on Sunday.

Remember all those studies about how unusually uninformed Fox News viewers are? That's now the president of the United States.

Believing anything he sees on Fox could give Trump some dangerous beliefs like "Attractive women freely associate with Bill O'Reilly." https://t.co/rKaaFkxsdy

WH can walk this back but he clearly wove Sweden into long list of locations of notable terror attacks.
"Who would believe this?! Sweden!" https://t.co/oHDnRXnczx

POTUS confirms the theory we've been talking about– that he heard about Sweden on Friday's "Tucker Carlson Tonight" https://t.co/K5NRr495Ho