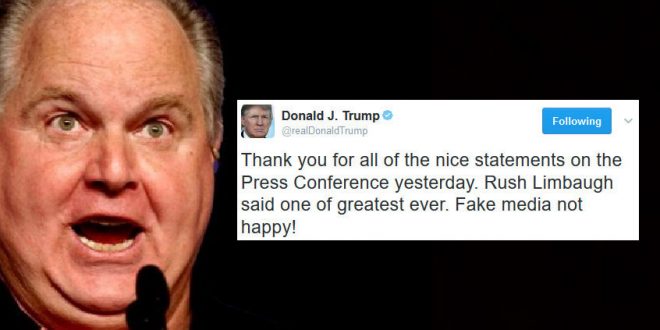 President Donald Trump praised himself on Friday for his Thursday battle with reporters — a more-than-hour-long meandering spectacle that one headline dubbed a “news conference for the ages.” Trump used his favorite social media platform to thank supporters who he said made “nice statements” about the speech and to take more aim at the press.

“Thank you for all of the nice statements on the Press Conference yesterday,” Trump tweeted. “Rush Limbaugh said one of greatest ever. Fake media not happy!” Limbaugh, the conservative talk radio host, described the press conference as “one of the most effective press conferences I have ever seen.”

Other observers, including reporters, commentators and Capitol Hill political types, reacted to the impromptu event with something of a collective jaw drop. CNN’s Jake Tapper described it as “unhinged” and an airing of grievances à la Festivus.

Thank you for all of the nice statements on the Press Conference yesterday. Rush Limbaugh said one of greatest ever. Fake media not happy!

Previous FLORIDA: Feds Bust Man In Complex Scheme To Bomb Target Stores So He Could Buy Their Stock Cheaply
Next SOUTH KOREA: Samsung Head Arrested In Corruption Scandal That Led To Impeachment Of President