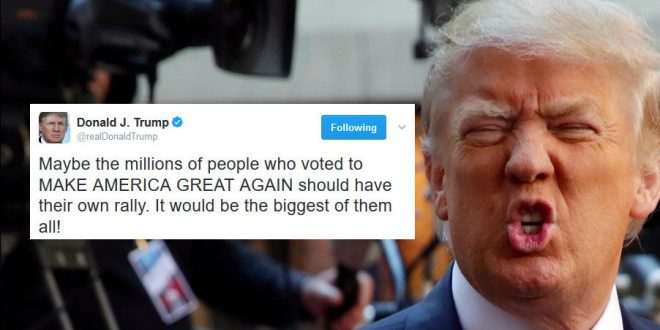 Trump Calls On Supporters To Have Trump Rally

Donald Trump has called on his supporters to hold their own rally after some of Hollywood’s biggest stars joined a high-profile rally against his administration. The event is one of countless global protests against Mr Trump’s policies, including for women’s rights, migrants and against moves to scrap protections against laws governing how transgender students use bathrooms.

The President’s supporters have turned out in their thousands to show support at official events but have not launched demonstrations comparable in scale to those of his opponents. His attempt to ban immigration from seven Muslim-majority countries has been one of the major rallying points, as a new executive order is planned after the first was suspended by a federal judge.