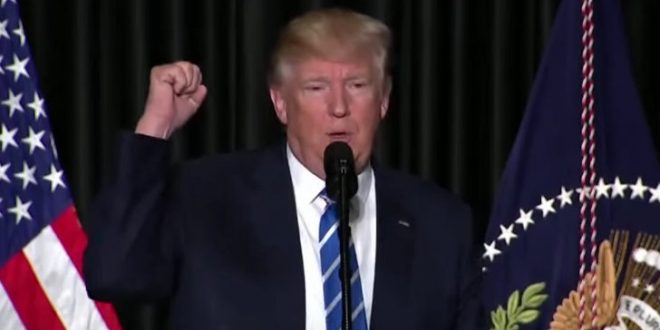 Trump Boasts To Police Group: “I Comprehend Very Well, Better Than I Think Almost Anybody” [VIDEO]

President Trump defended his immigration executive order Wednesday while speaking at the National Sheriffs’ Association’s winter meeting. After reading the entirety of the order, which bans people from seven predominantly Muslim nations from entering the U.S., Trump insisted the order “couldn’t have been written any more precisely.” Whether “you’re a good student in high school or a bad student,” Trump said, surely you can understand the ban.

Trump insisted he didn’t “ever want to call a court biased” so he “won’t,” though he did say “courts seem to be so political.” “And it would be so great for our justice system if they would be able to read a statement and do what’s right,” Trump said. “And that has to do with the security of our country, which is so important.”

He argued that it was “as plain as you can have it” that this ban is in the country’s best interest. “And I was a good student. I understand things,” Trump said. “I comprehend very well, better than I think almost anybody.”

.@POTUS stream of consciousness on travel ban this AM: "I was a good student. I understand things, I comprehend very well"
h/t @ArdenFarhi pic.twitter.com/OE3Ya8APN3