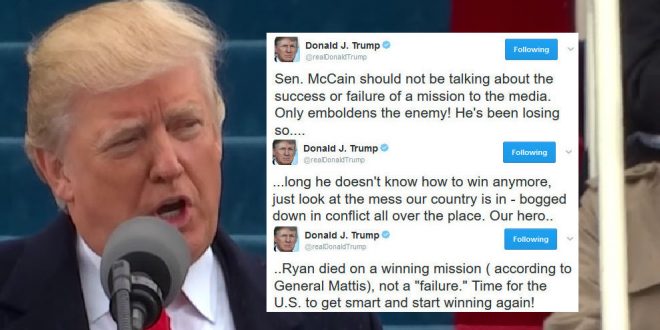 President Trump took aim at a pair of senators who have criticized him in recent days on Thursday morning, saying Sen. John McCain (R-Ariz.) “emboldens the enemy” by criticizing a recent military operation while accusing Sen. Richard Blumenthal (D-Conn.) of being a serial liar after he relayed critical comments from Trump’s Supreme Court nominee. Trump’s comments are the latest attacks on McCain, who he famously derided for being a prisoner of war during the Vietnam War early in the GOP primary with the line “I like people who weren’t captured.”

The comments were the latest escalation in a feud between McCain and the White House. After McCain made critical comments about a raid in Yemen that reportedly failed to achieve its objectives and killed one American soldier and a number of civilians, White House Press Secretary Sean Spicer demanded on Wednesday that everyone who had criticized the mission should apologize for doing a “disservice” to the fallen soldier.

McCain responded by with a statement that when he was a POW in North Vietnam, there was a failed attempt to rescue him and others — and that the troops who’d risked their lives to save him were “heroes” even though “the mission failed.” “Mr. Spicer should know that story,” he said.

This morning Trump also lied about CNN host Chris Cuomo. In fact, the very first question in Cuomo’s interview with Blumenthal was about his Vietnam claim.

Chris Cuomo, in his interview with Sen. Blumenthal, never asked him about his long-term lie about his brave "service" in Vietnam. FAKE NEWS!

1. Chris Cuomo actually did ask Blumenthal about that

Previous Scotland Has A Message For Trump [VIDEO]
Next Ethics Expert: Kellyanne Conway Could Face Penalties For Her Self-Described Ivanka Commercial [VIDEO]