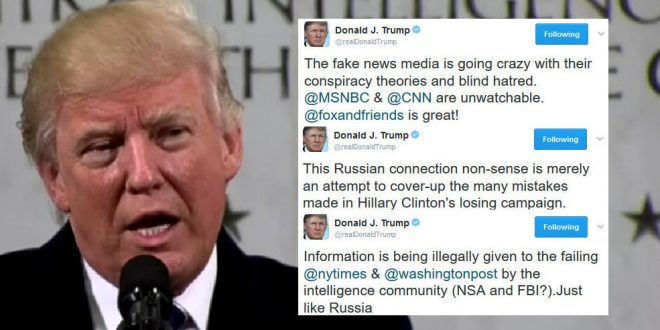 Today’s Trump Twitter Meltdown: Everything Is Fake News Except Fox And Don’t Forget That Hillary Lost

President Trump early Wednesday blasted the “fake news media” and leaks from the intelligence community after reports emerged that senior aides with his presidential campaign were in contact with Russian officials. Trump in his first tweet of the morning said the “fake news media” is “going crazy with conspiracy theories and blind hatred.” Tump slammed MSNBC and CNN, but said Fox News’s “Fox & Friends” is “great!”

Trump’s tweets follow reports in The New York Times and CNN that campaign aides were in “constant” contact with Russian officials. The officials cited in the Times report said they have not discovered collaboration between the Trump campaign staff and Russian officials related to the hacking of Democratic organizations. The Intelligence Community in a report released last month concluded that Russian President Vladimir Putin called for an influence campaign in an effort to help Trump win the White House.

The fake news media is going crazy with their conspiracy theories and blind hatred. @MSNBC & @CNN are unwatchable. @foxandfriends is great!

This Russian connection non-sense is merely an attempt to cover-up the many mistakes made in Hillary Clinton's losing campaign.

Information is being illegally given to the failing @nytimes & @washingtonpost by the intelligence community (NSA and FBI?).Just like Russia