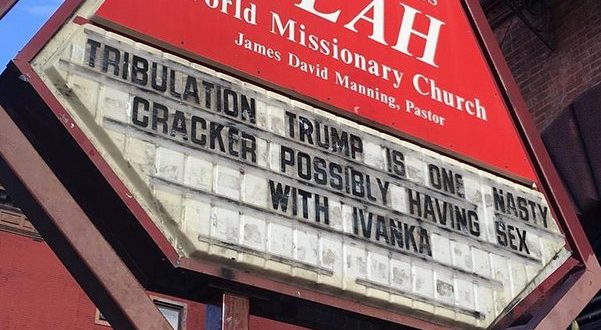 However in June 2016, Manning changed his mind about Jesus’ endorsement following Trump’s statement on the Pulse Massacre. That day Manning’s sign read, “The bible condemns Trump’s acceptance of sodomy and I withdraw my support. Sodomy is more dangerous than jihadis.”

And then two months later Manning flip-flopped yet again, celebrating in a YouTube sermon with this: “Donald says we can shoot again! Shoot the Mexicans! Shoot the Muslims! Shoot the liberals! Shoot everybody!”

Which brings us to today’s message. I haven’t been following Manning close enough recently to know what prompts this third reversal, so maybe somebody can fill us in.

Outside the Harlem church of James David Manning, who endorsed and then unendorsed Trump in 2016. pic.twitter.com/OxPGEdYzlp