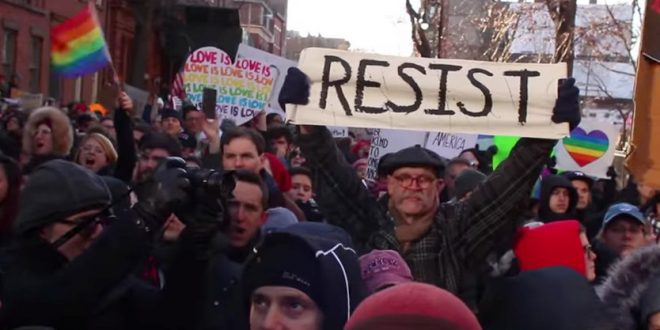 Carrying signs with messages such as “LGBT stands by our Muslim brothers and sisters,” thousands flooded Greenwich Village for a solidarity rally to show support for immigrants, refugees, and others impacted by Donald Trump’s travel ban on seven mostly-Muslim countries.

The rally was organized by City Councilman Corey Johnson and was held outside the historic Stonewall Inn, the country’s first national monument dedicated to LGBT history, and a site widely regarded as the birthplace of the gay rights movement.

“We wanted to stand here as a community to say if one minority is under attack — if one vulnerable person is under attack — then all of us are under attack,” Johnson said at the rally. A long list of performers, elected officials, and speakers also voiced their concerns about LGBT rights and say they’ll be watching the Trump Administration closely.

I took a few photos of my favorite signs. See them below.

Thousands and thousands here. Hard to count. Sea of people as far as eye can see. #stonewall pic.twitter.com/87ztBhSQgJ

Previous Melissa McCarthy Crushes It As Sean Spicer [VIDEO]
Next Trump Tells Bill O’Reilly: Yes, Vladimir Putin Is A Killer, But Do You Think Our Country Is So Innocent? [VIDEO]