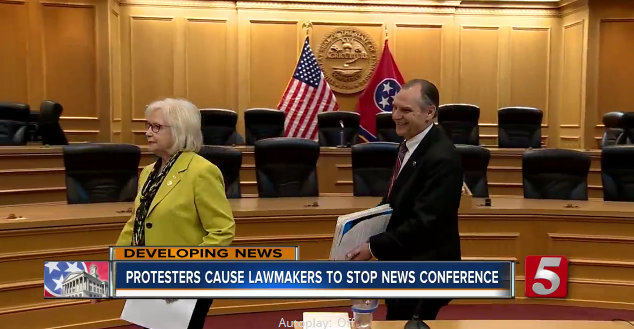 The room was full of people who, at first, silently protested by holding up signs, but grew louder once Rep. Pody began speaking about the marriage bill. That’s when Rep. Pody said “…Thank you for coming” and walked out of the room. The protesters quickly followed him out of the room and through the halls all the way to his office.

The “Natural Marriage Defense Act” would declare that Tennessee will only recognize and give effect to marriages between one man and one woman and would not recognize any court decision that purports to strike down natural marriage. Pody mentioned the bill received nearly 80 percent of support.

The “Bathroom Bill” would make it illegal for public school students to use a bathroom other than the one that corresponds with the gender on their birth certificate. It failed in legislature last year. It was protested and criticized nationwide, specifically in the LGBT community.

Previous Defense Secretary James Mattis Contradicts Trump: There Will Be No Military Collaboration With Russia
Next REPORT: Trump Had Boeing CEO Listen In When He Called Pentagon About Rival Lockheed’s Fighter Jets