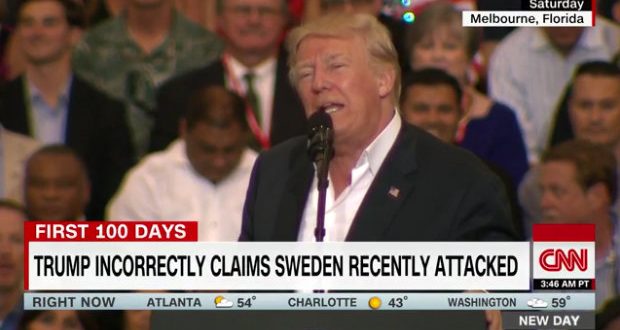 SWEDEN: Former Prime Minister Ridicules Trump Over Invented Terror Attack: What Has He Been Smoking?

Swedes reacted with confusion, anger and ridicule on Sunday to a vague remark by President Trump that suggested that something terrible had occurred in their country. During a campaign-style rally on Saturday in Florida, Mr. Trump issued a sharp if discursive attack on refugee policies in Europe, ticking off a list of places that have been hit by terrorists.

“Sweden? Terror attack? What has he been smoking? Questions abound,” Carl Bildt, a former prime minister and foreign minister, wrote on Twitter. Mr. Trump did not state, per se, that a terrorist attack had taken place in Sweden. But the context of his remarks — he mentioned Sweden right after he chastised Germany, a destination for refugees and asylum seekers fleeing war and deprivation — suggested that he thought it might have.

Sweden? Terror attack? What has he been smoking? Questions abound. https://t.co/XWgw8Fz7tj

When Sweden sends its Ikea tables, they’re not sending their best. They’re sending Bekant tables that have lots of problems. #swedenincident

My heart goes out to everyone who perished in the Swedish Meatball Massacre. Candlelight vigil at IKEA at dusk. #swedenincident

If only Frederick Douglass had been in Sweden when that terrible terrorist attack didn't happen. #SwedenIncident pic.twitter.com/Lxs5CLVbg4

Previous TANZANIA: Government To Publish List Of Gay Men After Closing HIV Clinics For “Promoting Homosexuality”
Next Reince Priebus: Take Trump’s Comments On Media Being The Enemy Seriously, Because They Are [VIDEO]