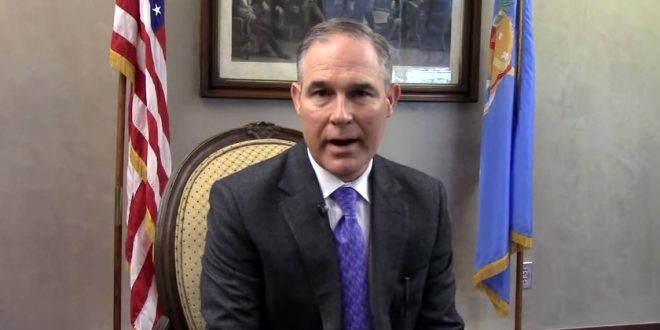 Scott Pruitt, who as Oklahoma’s attorney general spent years suing the Environmental Protection Agency over its efforts to regulate various forms of pollution, was confirmed Friday as the agency’s next administrator.

Pruitt cleared the Senate by a vote of 52-46, winning support from two Democrats, Joe Manchin of West Virginia and Heidi Heitkamp of North Dakota. Only one Republican, Susan Collins of Maine, voted against him, saying he had “fundamentally different” views than she about the EPA’s role.

The vote came after Democrats held the Senate floor for hours overnight and through the morning to criticize Pruitt as a pawn of the fossil-fuel industry and to push for a last-minute delay of his confirmation. Part of their argument was an Oklahoma judge’s ruling late Thursday that Pruitt’s office must turn over thousands of emails related to his communication with oil, gas and coal companies. The judge set a Tuesday deadline for the release of the emails, which a nonprofit group had been seeking for more than two years.

Republicans pressed forward with the afternoon vote, saying Pruitt had been thoroughly vetted in recent months and calling on Democrats to end what Senate Majority Leader Mitch McConnell (R-Ky.) called “a historic level of obstruction” in holding up Trump administration nominees.

Pruitt, you’ll be shocked to learn, is a vicious opponent of LGBT rights and has argued that the Supreme Court’s rulings on marriage have no impact on anti-gay Oklahoma laws.