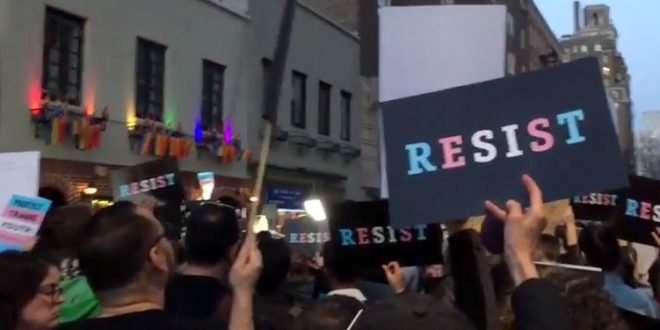 Thousands of demonstrators gathered in front of Stonewall Inn Thursday night to protest President Donald Trump rolling back protections for transgender Americans. In the description of the Facebook event for their protest, Rally organizers said they wanted to “make it clear that we will fight to keep protections for Trans and gender non-conforming people and students.”

Doing so, protesters signal their disapproval of Trump’s decision to rescind an Obama administration guidance that told schools to allow students to use the bathroom that matches their gender identity. Protesters at Stonewall said their rally was about much more than bathroom access. They viewed Trump’s move as an attempt to roll back rights for transgender Americans and an assault on the LGBT movement.

Currently marching with hundred of people from the #trans rights rally at Stonewall. #claimyourrights pic.twitter.com/zisGUxwanq

Previous Caitlyn Jenner To Trump: This Is A Disaster [VIDEO]
Next Trump Attacks FBI Over Leaks, Which He Now Hates