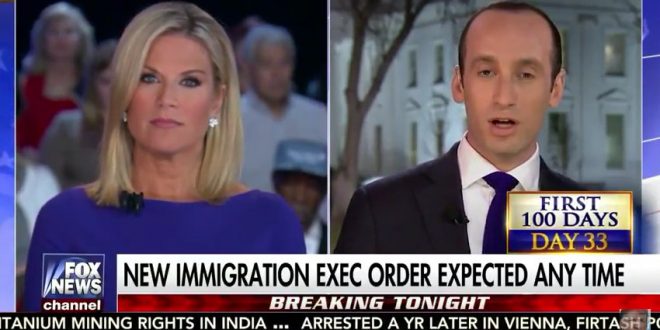 Stephen Miller: Trump’s Coming Travel Ban Will Be “Fundamentally” The Same As The First One [VIDEO]

Fox News held an immigration town hall event in Jacksonville, Florida, on Tuesday night, and host Martha MacCallum started off by asking White House policy adviser Stephen Miller via satellite about President Trump’s coming replacement executive order limiting immigration from seven majority-Muslim countries and refugees. “So how is it going to be different this time?” she asked.

“Well, nothing was wrong with the first executive order, however there was a flawed judicial ruling that was erroneous,” Miller said. “Because of the exigency of the situation,” he added, “the president is going to be issuing a new executive action — based off of the judicial ruling, flawed though it may be — to protect our country and to keep our people safe, and that is going to be coming very soon.”

The new order will be “responsive to the judicial ruling,” including mostly “minor, technical differences,” Miller said. “Fundamentally, you’re still going to have the same basic policy outcome for the country, but you’re going to be responsive to a lot of very technical issues what were brought up by the court, and those will be addressed.”

The ACLU this morning reacted to Miller’s vow that the new travel ban will be just as bad as the first one.

So then we will have the same basic response. https://t.co/tMTAWYDRWm