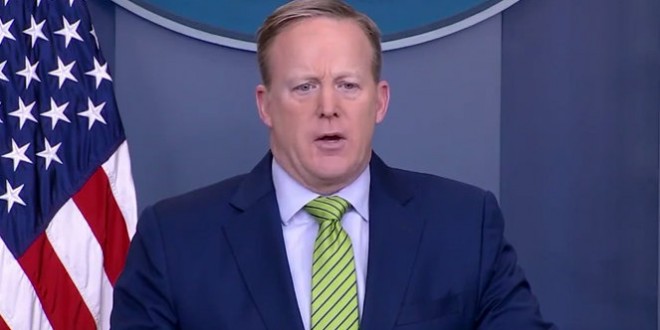 Spicer On Anti-LGBT Order: “Ideas Are Being Floated” But The Pendulum Is Swinging To “Religious Liberty”

Asked whether the draft in circulation is one being considered by President Trump, Press Secretary Sean Spicer said at a White House briefing Thursday, “Right now, there are no executive orders we are able to read out.” He added, however, that there are a “lot of ideas being floated out,” and “input and ideas” being provided “on a variety of subjects.” But he said that “until the president makes up his mind, there’s nothing going out.”

The answer provided little relief to LGBT legal activists, particularly given that President Trump on Wednesday, met with almost a dozen representatives of right-wing groups, including those with specifically anti-LGBT agendas. And at the National Prayer Breakfast Thursday morning, President Trump reiterated his support for eliminating the “Johnson Amendment,” which prohibits tax exemptions for organizations participating in political activity.

Start the clip at 9:30. Note that Spicer three times says the “pendulum” is now swinging back to so-called religious liberty.