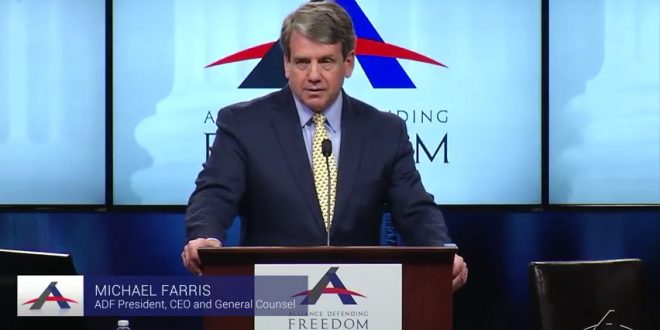 From the SPLC’s report:

According to its website, the Alliance Defending Freedom (ADF) was launched on the morning of Jan. 31, 1994, during a meeting of more than 30 Christian leaders, in order to “defend religious freedom before it was too late.”

The founding board and original funders included James Dobson of Focus on the Family; Bill Bright of the Campus Crusade for Christ; D. James Kennedy of Coral Ridge Ministries (now D. James Kennedy Ministries); and Don Wildmon, founder of the American Family Association. Its original purpose was to oppose the ACLU and other “radical groups” as well as to fight for “religious liberty.” Since its founding, the ADF has expanded its operations abroad as it battles abortion, LGBT equality, and what it considers the “myth” of the separation of church and state.

Originally called the Alliance Defense Fund (the name changed in 2012), the ADF has been funding cases and training attorneys since its inception, claiming that it is “advocating for freedom in court,” though it also is working to “change the culture,” because, it says, legal victories aren’t enough. In other words, the ADF is attempting to do away with the separation of church and state and graft its version of conservative Christianity onto the legal profession and the culture at large through its legal strategies and the training of thousands of attorneys and by advocating for policy changes on state and federal levels.

From the ADF’s Wikipedia page:

The ADF reported a total revenue of $61.9 million for the year ending June 30, 2015, and net assets of $39.9 million. This compares with a budget of $9,000,000 in 1999.  Some of its funds come from the Richard and Helen DeVos Foundation, the Bradley Foundation, the Edgar and Elsa Prince Foundation, the Covenant Foundation and the Bolthouse Fund, which affirms “that man was created by a direct act of God in His image, not from previously existing creatures, and that all of mankind sinned in Adam and Eve, the historical parents of the entire human race”

Previous Trump Asked About Rise In Anti-Semitism Since Election Win, Responds By Bragging About Winning [VIDEO]
Next REPORT: Fast Food Zillionaire Andy Puzder To Withdraw As Labor Nominee Because He’s “Tired Of The Abuse”