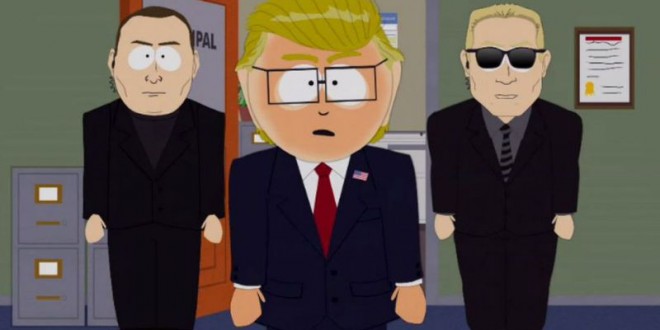 South Park Gives Up On Trump: Satire Is Now Reality

The Donald Trump administration is too difficult to satirize because it is funny enough on its own, say Trey Parker and Matt Stone, the creators of South Park. While the most recent series of their animated sitcom featured a character that clearly resembles Mr Trump, the pair made the decision to “back off” making fun of the latest US political events. It’s tricky now because satire has become reality,” Parker told us.

“It’s really hard to make fun of and in the last season of South Park, which just ended a month-and-a-half ago, we were really trying to make fun of what was going on but we couldn’t keep up and what was actually happening was much funnier than anything we could come up with. So we decided to kind of back off and let them do their comedy and we’ll do ours.”

Previous Spicer On Anti-LGBT Order: “Ideas Are Being Floated” But The Pendulum Is Swinging To “Religious Liberty”
Next Fox News Analyst On Trump’s War Threat To Iran: It’s Like A Crusade, We’re Doing It Under God [VIDEO]