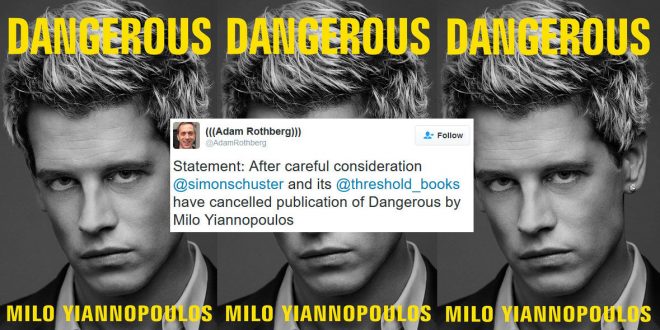 Publishing company Simon & Schuster has cancelled a book deal for alt-right personality Milo Yiannopoulos, following the circulation of a video in which he condoned pedophilia. The company had previously defended its decision to offer Yiannopoulos a $250,000 book deal, saying that the book would not contain the hate speech for which Yiannopoulos is famous.

But after a video of Yiannopoulos condoning sexual relationships between boys and older men went viral Sunday night, the publishing company faced renewed pressure to drop the deal. Earlier Monday, the Conservative Political Action Conference organizers announced that they had rescinded Yiannopoulos’s invitation to speak at the conference. Yiannopoulos has since defended himself, saying he does not support pedophilia, and that his statements were taken out of context.

Advance orders for the book have kept it at or near the top of Amazon’s best-sellers chart. Refunds!

Statement: After careful consideration @simonschuster and its @threshold_books have cancelled publication of Dangerous by Milo Yiannopoulos