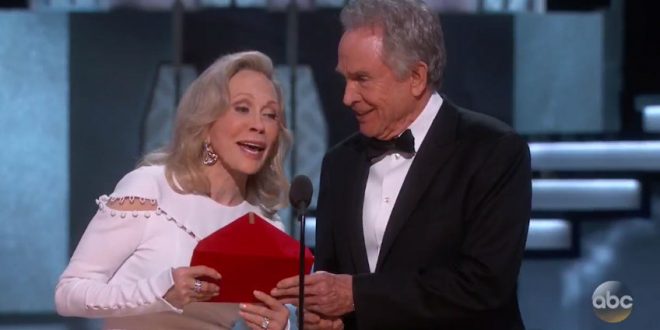 Paging Steve Harvey. “La La Land” was mistakenly announced as the Best Picture at the Oscars Sunday night instead of “Moonlight,” the rightful winner.

In one of the most controversial categories of the night, Warren Beatty announced the Emma Stone-helmed flick as the Best Picture. The cast crowded onto the stage for their acceptance speeches when suddenly Jordan Horowitz, the “La La Land” producer, announced the correction: actually, “Moonlight” won.

“It’s not a joke. I’m afraid they read the wrong thing,” Horowitz said. Beatty, presenting the award with Faye Dunaway, said he read the wrong card. “I opened the envelope and it said Emma Stone, ‘La La Land,’” Beatty explained.

What REALLY sucks is that the story will be the flub and not that a gay drama just won Best Picture.

Nothing like a movie twist. How "La La Land" won, then lost, the Oscar for best picture to "Moonlight" https://t.co/As9ZR7G5Tb pic.twitter.com/P8OuBRiM8m

Previous REPORT: Trump’s Navy Secretary Nominee To Withdraw
Next Marco Rubio: I Can’t Do Any Town Halls Because Mean Liberal Activists Will “Heckle And Scream” At Me