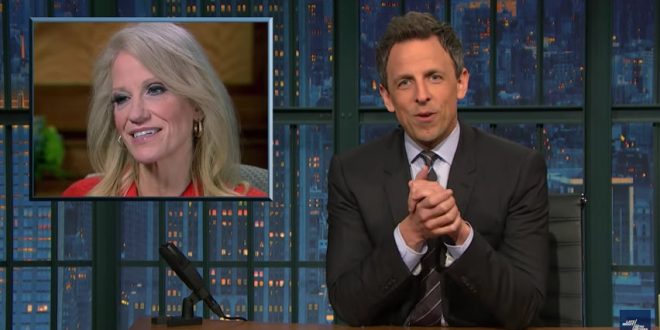 Late Night’s Seth Meyers presented a “Closer Look” about Trump’s travel ban and recent comments about the press. Meyers said the rollout of Trump’s ban “is so bad, in fact, that Trump’s advisers are now making up fake tragedies to try and justify it,” referring to Conway’s “Bowling Green Massacre.”

“Now, if you were embarrassed you didn’t remember the Bowling Green Massacre, don’t be. It’s an incident that never happened. Like the Titanic crashing into the Hindenburg, or when Lee Harvey Oswald was shot by a unicorn.”

“Even when they’re lying, they’re distracting us from other, worse lies,” he said of the Trump administration. “That’s like telling people you have a girlfriend in Canada when really, you have a dead body in the basement.”