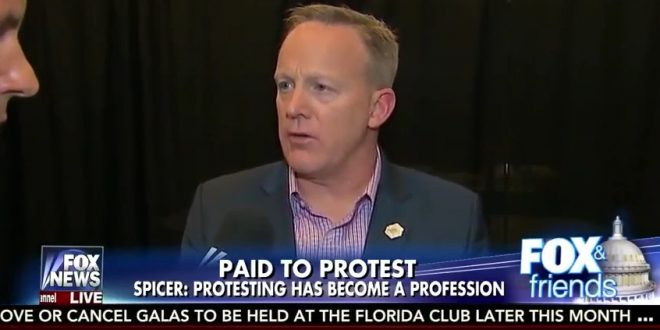 White House Press Secretary Sean Spicer has taken the Trump administration’s hostility towards the opposition one step further by saying that those protesting President Donald Trump’s refugee ban/travel ban/travel restrictions are demonstrators paid to be there and not legitimately against the ban. In an interview with Brian Kilmeade of Fox News Channel’s “Fox and Friends” that aired on Monday morning, Kilmeade asked Spicer if he thought this was the case, and the press secretary agreed with the premise wholeheartedly:

Kilmeade: “Do you sense that instead of being an organic disruption, do you sense that there’s an organized pushback and people are being paid to protest?” Spicer: “Oh, absolutely. I mean, protesting has become a profession now. They have every right to do that, don’t get me wrong, but I think that we need to call it what it is. It’s not these organic uprisings that we’ve seen through the last several decades. The Tea Party was a very organic movement. This has become a very paid, ‘astroturf’ type movement.”

Previous Pat Robertson: George Soros Is Paying Protesters To Make It Look Like Trump’s Ban Is Unpopular [VIDEO]
Next LIES UPON LIES UPON LIES: Trump Claims “Dishonest Press” Is Covering Up Incidents Of Terrorism [VIDEO]