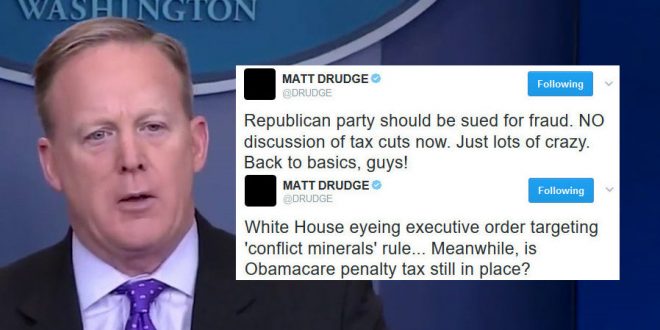 Spicer made the comments at the daily press briefing when Breitbart White House correspondent Charlie Spiering asked for a response to Drudge and “anyone who is worried that the momentum is stalling” on repealing Obamacare and cutting taxes.

“I think it’s hardly stalling,” Spicer replied. “I think it’s a mammoth thing to repeal and replace. I think there’s no question to the president’s commitment to doing this.” Spicer said that Obamacare is a “big bill” that got “jammed through” Congress when it was passed.

“We can either do it quickly, as the Democrats did, and end up with a monstrosity, where premiums go up and access is limited,” he said, referring to repealing and replacing the Affordable Care Act with a GOP solution. “Or we can do it right.”