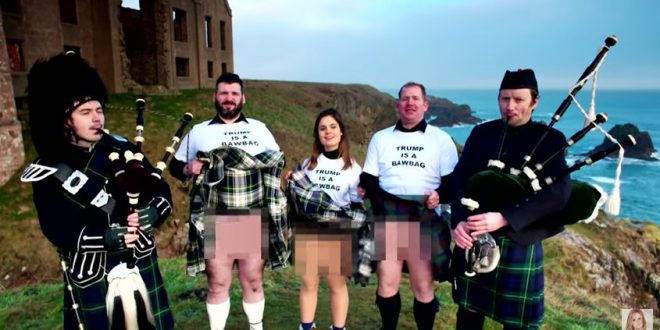 Scotland Has A Message For Trump [VIDEO]

Full Frontal sent correspondent Amy Hoggart to Scotland to learn about resisting oppression from people who have been resisting Trump since he built Trump International Golf Links in their country.

More than a decade ago, he descended on the country promising to create 6,000 job and telling TV reporters, “I’m an artist and this is probably the greatest piece of canvas that anybody’s ever worked on.” “Ugh, why is it always failed artists,” Hoggart groans.

First, she speaks to Michael Forbes, the farmer who famously refused to sell Trump his land, getting in the way of his plans. Forbes advised that when Trump’s opening line was: “What is the land worth? $25 an acre?” he knew “in 10 seconds, he was an assh*le” and said, “In your f*cking dreams.”

You definitely enjoy the clip.