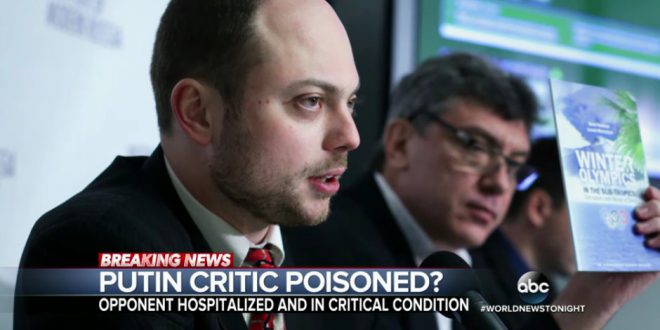 The wife of a poisoned Russian opposition activist says President Donald Trump must not consider Vladimir Putin a friend. In an exclusive interview with ABC News after visiting her comatose husband in a Moscow hospital, Evgenia Kara-Murza said, “[Trump] must know that such people as Vladimir Putin are not friends. And they cannot be dealt with on friendly terms.”

Her husband, 35-year-old Vladimir Kara-Murza, an outspoken critic of Putin, remains in critical condition, fighting for his life, she said. His doctors say he was poisoned by an unknown substance, she added. The activist was hospitalized on Thursday shortly after feeling ill; within hours, most of his major organs were failing. It is the second time in two years that he was poisoned; the first time, in 2015, left the father of three with nerve damage that left him walking with cane.

Evgenia Kara-Murza said that she does not know who is behind the poisoning but that she believes it can only be related to his work. A veteran opposition campaigner, he has appeared repeatedly before the U.S. Congress, pressing for it to impose sanctions on Russian officials involved in human rights abuse.