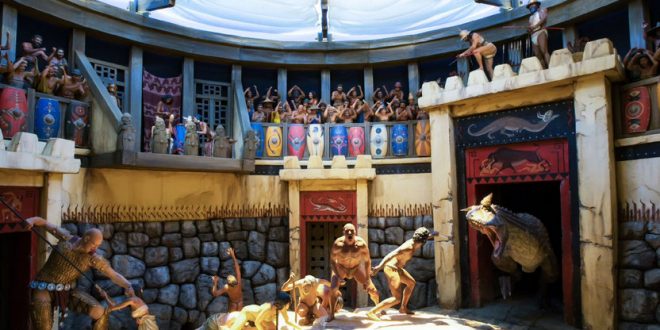 A new display going into the creationist Noah’s Ark attraction in Kentucky shows what appears to be gladiator-style fights involving humans, giants and a dinosaur. Ken Ham, founder of the group that runs the attraction, tweeted images of the new diorama on Thursday.

The dinosaur is visible in the far right of the first image, which has a giant on the left apparently about to spear a human. Ham, who believes in a strict literal interpretation of the Bible, claims the planet is roughly 6,000 years old, that humans existed alongside dinosaurs and that Noah even carried dinosaurs with him on the ark during a global flood roughly 4,300 years ago.

The above-linked article tartly notes that dinosaurs went extinct about 65 million years before homo sapiens arrived. Also, there’s no “scientific evidence” that a race of giants ever existed. Exquisite design by @ArkEncounter artists for new Diorama depicting wicked population in the pre-Flood world to be installed @ArkEncounter pic.twitter.com/4JHQiTEWbG