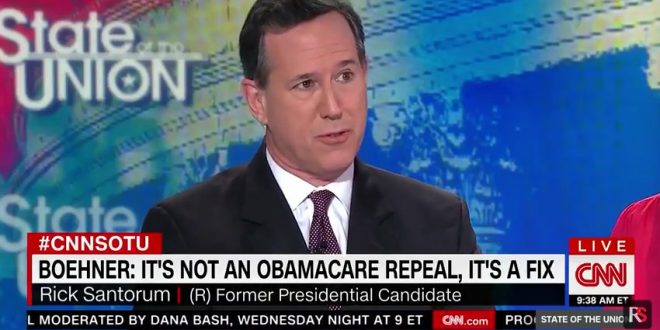 CNN contributor Rick Santorum suggested on Sunday that it was a mistake to guarantee health care coverage for people with preexisting conditions because “millions” of them were scamming insurance companies.

During a panel discussion about health care reform, Santorum argued that President Barack Obama’s health care reform law had damaged the health care system to the point that the Republican lawmakers could not “repeal and replace” it at the same time.

“Pre-existing conditions, though it’s very popular,” the former GOP senator opined, “what the reality is today that thousands, maybe approaching millions of Americans, are paying nine months for insurance. Why? Because you pay for your insurance for nine months, there’s a provision in Obamacare that says you can’t be thrown off your plan for three months.”

“So, you stop paying in September until the end of the year,” he continued. “You have a right to guaranteed [coverage for] preexisting conditions. You can buy a new plan in January. So people are paying nine months for 12 months of care. And it’s happening more and more and more as people get the gig.”