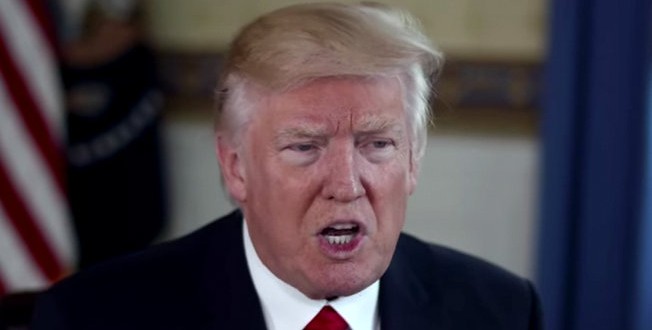 REPORT: Trump Threatened Mexican President With Sending US Troops To Stop “Bad Hombres Down There”

President Donald Trump threatened in a phone call with his Mexican counterpart to send U.S. troops to stop “bad hombres down there” unless the Mexican military does more to control them itself, according to an excerpt of a transcript of the conversation obtained by The Associated Press.

The excerpt of the call did not make clear who exactly Trump considered “bad hombres,” — drug cartels, immigrants, or both — or the tone and context of the remark, made in a Friday morning phone call between the leaders. It also did not contain Mexican President Enrique Pena Nieto’s response.

Still, the excerpt offers a rare and striking look at how the new president is conducting diplomacy behind closed doors. Trump’s remark suggest he is using the same tough and blunt talk with world leaders that he used to rally crowds on the campaign trail. A White House spokesman did not respond to requests for comment.

“You have a bunch of bad hombres down there,” Trump told Pena Nieto, according to the excerpt seen by the AP. “You aren’t doing enough to stop them. I think your military is scared. Our military isn’t, so I just might send them down to take care of it.”

Did @realDonaldTrump just threaten war with Mexico? Trump to Mexico: Take care of 'bad hombres' or US mighthttps://t.co/Mknm5YlLte

So.. @POTUS Trump threatened to invade Mexico per excerpt of phone conversation between Trump and Peña Nieto obtained by @AP 😳 #12News pic.twitter.com/rKvCBQ1pge

AP: Trump threatened to send US troops to Mexico to stop "bad hombres down there," in phone call w/Mexican president https://t.co/S26HOIbQrE pic.twitter.com/sWEHLBRvjX