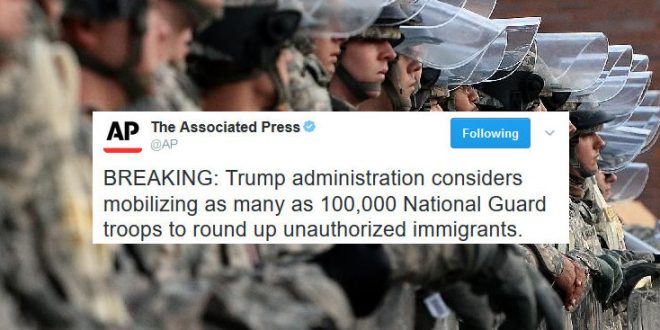 The Trump administration is considering mobilizing as many as 100,000 National Guard troops to round up non-citizens who are in the country illegally, the Associated Press said in a tweet on Friday without citing a source.

UPDATE: From the Associated Press.

The Trump administration is considering a proposal to mobilize as many as 100,000 National Guard troops to round up unauthorized immigrants, including millions living nowhere near the Mexico border, according to a draft memo obtained by The Associated Press.

The 11-page document calls for the unprecedented militarization of immigration enforcement as far north as Portland, Oregon, and as far east as New Orleans, Louisiana. Four states that border on Mexico are included in the proposal — California, Arizona, New Mexico and Texas — but it also encompasses seven states contiguous to those four — Oregon, Nevada, Utah, Colorado, Oklahoma, Arkansas and Louisiana.

Governors in the 11 states would have a choice whether to have their guard troops participate, according to the memo, written by U.S. Homeland Security Secretary John Kelly, a retired four-star Marine general. While National Guard personnel have been used to assist with immigration-related missions on the U.S.-Mexico border before, they have never been used as broadly or as far north.

The memo is addressed to the then-acting heads of U.S. Immigration and Customs Enforcement and U.S. Customs and Border Protection. It would serve as guidance to implement the wide-ranging executive order on immigration and border security that President Donald Trump signed Jan. 25. Such memos are routinely issued to supplement executive orders.

This is not true. DHS also confirms it is 100% false https://t.co/MFIJci7XaU

Previous Chris Christie: Trump Made Me Order The Meatloaf
Next MICHIGAN: Court Rules Against Anti-Gay Church Who Sued Man For Sign Saying They “Believe In Love”