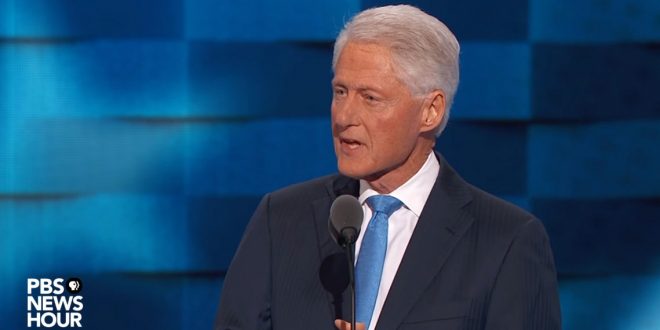 REPORT: Bill Clinton Moved To Tears After Waiter Gets On Knees To Thank Him Saving His Life In Kosovo

“Former Secretary of State Hillary Clinton and her husband President Bill Clinton were drawn to tears while dining [on Friday night] at Sea Fire Grill in New York City. After enjoying a dinner of salads, smoked salmon and branzino with a close friend, one of the wait staff dropped to his knees and said, ‘Sir, I want to thank you. If not for you, I wouldn’t be alive today.’ He told President Clinton he was an Albanian immigrant who at the age of 16 was living in Kosovo during the war and had to flee his home with his family along with thousands of others for their safety with nowhere to go. They spent nights sleeping outside in the hills.

“As he recounted his story of him and his father being held at gunpoint, robbed and subsequently tortured like so many of his friends and neighbors, President Clinton reached out, held his hand and wept. He then thanked the President again, as they and many thousands of others survived due to the help of military efforts President Clinton authorized to drive Yugoslavian occupying forces out of Kosovo to bring peace to their country. The former First Lady and President were told that the majority of staff are from Albania, and wanted to extend their gratitude as well, the President insisted on meeting everyone and shaking their hands.”

A separate report on TMZ notes that the waiter refused to allow the press to photograph him afterwards because he fears reprisals from Trump fans.

Previous Fox Host Chris Wallace Blasts Priebus: Obama Didn’t Get To Tell Us What To Do And You Don’t Either [VIDEO]
Next LONDON: Mayor Opposes State Visit By “Cruel” Trump