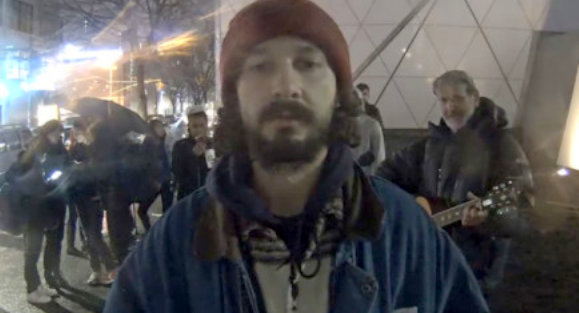 A museum in Queens has shut down an online art installation by the actor Shia LaBeouf, calling it a “serious and ongoing public safety hazard” after Mr. LaBeouf was arrested and the exhibit became a target for threats of violence.

The participatory exhibit, “He Will Not Divide Us,” was a collaboration between Mr. LaBeouf and the artists Luke Turner and Nastja Sade Ronkko. Intended as a rebuke to President Trump, the exhibit hinged on a video camera mounted on the outside of the Museum of the Moving Image in Astoria, Queens, into which passers-by were invited to repeat the phrase “he will not divide us.”

The museum cited Mr. LaBeouf’s arrest along with “dozens of threats of violence and numerous arrests” in announcing that it had closed the exhibit. “The installation had become a flash point for violence and was disrupted from its original intent,” the museum said in a statement. On Friday, the exhibit’s website had replaced its video stream with the words “The museum has abandoned us,” in stark white against black. “On February 10, 2017, the Museum of the Moving Image abandoned the project. The artists, however, have not.”

There are dozens of YouTube videos in which Trump fans show themselves waving Pepe cartoons, swastikas, and other white supremacist imagery at LaBeouf’s camera. In one notable trolling action, Trump fans altered the museum’s sign to read “Museum Of Kek.” Kek was the Egyptian god of darkness and chaos and was often depicted as a frog-headed man, hence its recent association with Pepe.

Previous NFL Warns Texas Lawmakers: Drop That Bathroom Bill If You Ever Want To Host Another Super Bowl
Next Trump Tells Senators That Thousands Were Bused In From Massachusetts To Vote Illegally In New Hampshire