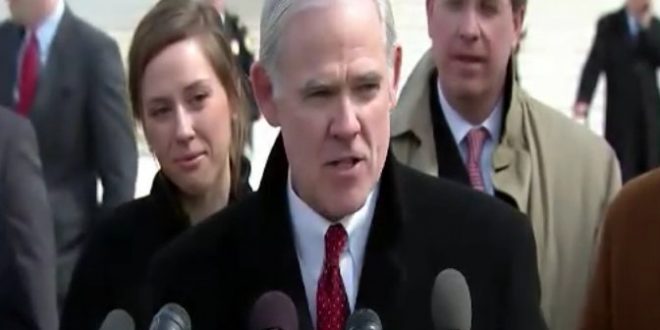 The Protect Marriage lawyer who defended Prop 8 at the Supreme Court and who later appeared to “evolve” on same-sex marriage is expected to be Trump’s pick for Solicitor General. Yahoo News reports:

Conservative lawyer Chuck Cooper has emerged as Donald Trump’s likely pick to be the nation’s next solicitor general, three sources say. As the nation’s top advocate, Cooper would be charged with defending legal challenges to U.S. laws and Trump’s executive orders, such as the suit against Trump’s travel ban that is currently wending its way through the courts.

Cooper is a longtime friend of Trump’s attorney general nominee, Sen. Jeff Sessions. Cooper, a fellow Alabaman, helped prepare Sessions for his confirmation hearing in front of the Senate Judiciary Committee last month, which was seen as a success by those in Trump’s orbit.

Sessions has decided he wants Cooper for the job, and according to one source close to the White House, Trump has agreed to let Sessions choose the solicitor general, who represents the federal government before the Supreme Court.

Cooper has argued before the Supreme Court seven times. His last appearance was in 2013, when he unsuccessfully urged the court to uphold California’s 2008 voter initiative that banned same-sex marriage in the state.

Cooper’s confirmation process could be complicated both by his 2013 defense of the same-sex marriage ban and by his 1986 argument, while in the Office of Legal Counsel, that the federal government could reject job candidates with AIDS out of fear of contagion. Also controversial will be his 1982 role as a lawyer in the DOJ’s Civil Rights Division arguing for the federal government to reverse a ban on giving tax breaks to private schools that discriminated based upon race.

One year after defending Prop 8, Cooper announced that he was thrilled to participate in his daughter’s same-sex marriage ceremony. Prop 8 plaintiffs Kris Perry and Sandy Stier reacted:

“We were so moved to hear of the Cooper family’s constant love and support of their own daughter, even as the Perry case was in full swing and Mr. Cooper was spending his days planning Prop 8’s defense. Some may find this contrast between public and private jarring, but in our opinion, loving an LGBT child unequivocally is the single most important thing any parent can do. We are overjoyed for Ashley and her fiancée, and we wish them the very best.”

Previous Jake Tapper: We Don’t Care If Trump Hates CNN
Next Scotland Has A Message For Trump [VIDEO]